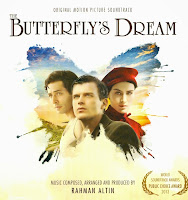 The original motion picture soundtrack for the Turkish blockbuster drama The Butterfly’s Dream was released on CD and digitally in the United States on November 7, 2013.  Composed, arranged and produced by celebrated Turkish feature film, TV, and video game composer Rahman Altin, the film’s epic soundtrack immediately became No. 1 on Turkey’s music charts following its release and has since won the World Soundtrack Academy’s ‘Public Choice Award’ for 2013.  Altin’s score is earnest and majestic, an emotionally provoking rainbow of orchestral textures and lyrical motifs, both introspective and exhilarating in its often quiet beauty and spacious appeal.  Performed exquisitely here by The City of Prague Philharmonic Orchestra conducted by Miriam Nemcova, the solo piano parts are played subtly and expressively by the composer himself.

Award winning composer, arranger and producer Rahman Altin is a dynamic presence in the world of music creation, successfully scoring for film, TV and video games.  Along with his recent scoring of The Butterfly’s Dream he’s worked on numerous campaigns, trailers and projects, including Iron-Man 3, The Amazing Spiderman, The Green Lantern, Monsters vs. Aliens and the miniseries The Pacific.  Additionally, the venerable Lucas Film company licensed his music for the Star Wars BluRay campaign and Rahman has also won several "Best Film Music" awards for his brilliant score for the feature film Waiting for Heaven.

Rahman Altin's interest in music manifested itself at an early age, influenced by his father, a musician, and his mother, a poet and painter.  During his college years he started to explore merging work on a synthesizer and computer with his classical education.  After finishing music conservatory he sang as a tenor at the Ankara State Opera, while composing and arranging his first projects.  Now living in both Los Angeles and Istanbul, he is the first and only musician from Turkey to participate in the Film Scoring Workshop sponsered by ASCAP and Fox.  He is also dedicated to nurturing young talent by serving on numerous juries for international film & TV awards.

Renowned Director/Writer/Actor Yilmaz Ertoğan’s The Butterfly’s Dream was released in February, 2013, and was subsequently selected to represent Turkey as its entry for Best Foreign Language Film for 2014’s Academy Awards and Golden Globe Awards.  The Butterfly’s Dream is the most expensive film ever to be produced in Turkey and this commitment is reflected in its impeccable production values, epic music and sensational response at the Istanbul Film Festival. 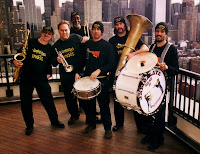 If you find that your musical and cultural diet has felt a little bland lately and been wondering where you might spice it up, well search no more—you won’t want to miss the master musical chefs of the Jambalaya Brass Band! The Jambalaya Brass Band releases their second CD, On The Funky Side.  Their previous outing, It’s a Jungle Out There, resulted in heavy broadcast radio rotation on eighty-five stations, as well as countless Internet radio stations, and charted in the top five of the CMJ Charts, The Roots Music Report and the Cashbox Charts. As with It’s a Jungle Out There, this latest CD includes several innovative original compositions by leader Ric Frank, and a few classic covers, this time by the likes of the Dirty Dozen Brass Band and Booker T. & the MGs.

"Jambalaya could stand side-by-side with most any New Orleans brass band in terms of sheer exuberance and energy . . . a party from start to finish."—Henry Smith for All About Jazz


Like It’s a Jungle Out There, their previous CD, On the Funky Side is a rollicking musical journey and a great celebration of American music while at the same time an appetizing preview of what this group is capable of live.  Playing On the Funky Side at a party is a sure bet, and seeing these talented players live really brings the party directly home to you. The Jambalaya Brass Band currently resides in New York City.  Visit them on their website at www.jambalayabrassband.com

Posted by Redwood Entertainment at 2:30 PM No comments: 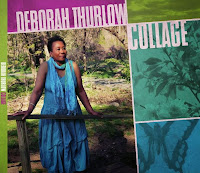 As a follow-up to her previously released single “Where Were You,” composer and singer/songwriter Deborah Thurlow is now releasing her new CD, Collage, on October 1, 2013.  A departure from her previous releases of modern classical/jazz music, Collage is a collection of twelve original Adult Contemporary songs that are seductive and inspiring.

Check out the great songs on Collage:


Deborah Thurlow is a composer/horn player/vocalist/songwriter/music educator and a freelance musician in the New York City area and Europe.  She starred in her own one act play with music, The Creative Void Of The Planet Earth, which was featured in an Equity Showcase run of seven performances by the New Media Repertory Company under the direction of Miranda MacDermot.  She has also performed with the Pina Baush Ballet Company, Franz Kaman, David Amram, Anthony Davis, and The New York Composers Orchestra, to name but a few.  She studied both composition and orchestration with John Corigliano at Lehman College and has received grants from Meet the Composer, ASCAP Awards, William Petshek Music Fund and the Puffin Cultural Foundation.  Her modern classical/jazz works are published with Ensemble Publications/Nichols Music Company and DSM Producers who cater to the film and TV industry exclusively. 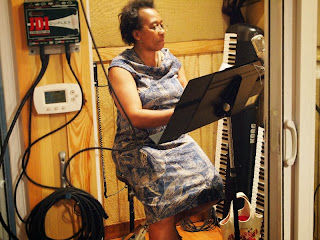 Posted by Redwood Entertainment at 8:02 AM No comments:

Redwood Entertainment brings the world some of the best in music!

Thank you for listening, and we wish you, and yours, a great Thansgiving!

Posted by Redwood Entertainment at 1:56 PM No comments: 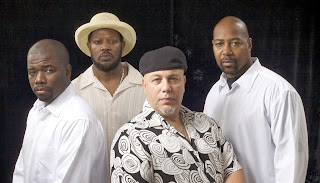 In support of their highly acclaimed CD Beyond the Blues Back Alley Players will be performing a free concert at the Goddard Riverside Community Center in NYC on Wednesday, November 6, 2013, from 7:00 to 8:00 pm.  Back Alley Players is a group of seasoned musical pros from a variety of musical backgrounds from Jazz and Funk, to Hip-Hop and R&B.  But make no mistake, this tight and tasty ensemble is creating a joyful blues for the 21st century that draws on many of the disparate elements of traditional blues which are rarely heard in one setting.  And this is exquisitely demonstrated on their successful CD release Beyond the Blues. 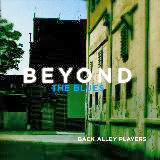 “Beyond the Blues is a fantastic and fresh debut . . .”
—Jon Norton, Music Director at WGLT, Normal, IL, for Blues Blast Magazine

At the Goddard Center the Back Alley Players’ rhythm section will feature drummer Stix Bones and bassist Al Brisbane—and what a foundation these players provide!  They create a pocket that effortlessly propels the band and allows singers L. Umar Conry and ShiNuh Holt, and guitarist Johnny Turco, along with the band’s surprise special guest keyboardist, to put the icing on the cake as they glide on that propulsion like an ice cube on a hot stove.  As Blues Blast Magazine has pointed out in reference to Beyond the Blues, these dudes “deliver one of the tastiest and schizophrenic soul and country blues releases since, well, ever.”  Back Alley Players are a soulful combination of the talents and energy of a group of very impressive individuals who form a flawless, seamless whole.

Don’t miss this opportunity to catch a live performance by the Back Alley Players.  Putting on Beyond the Blues at a party is a sure bet, and seeing Back Alley Players live is an experience that you won’t soon forget.


Posted by Redwood Entertainment at 7:54 AM No comments: